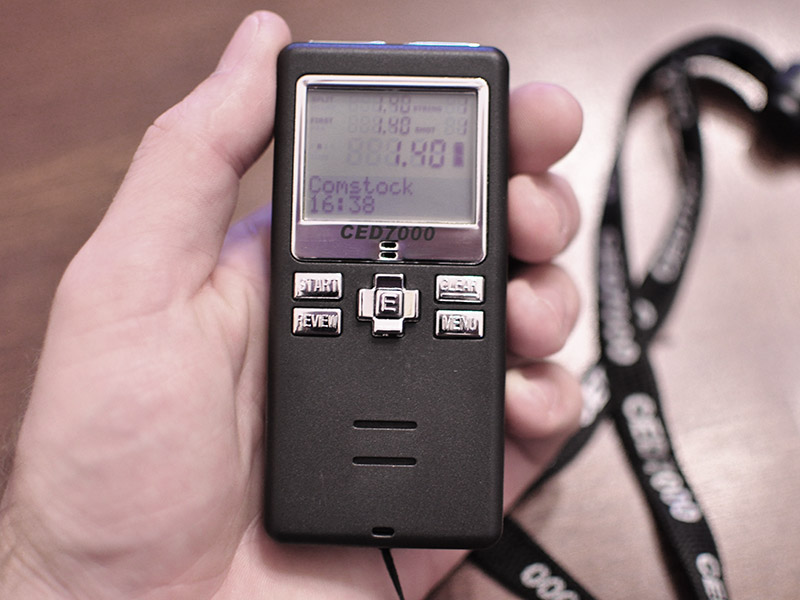 The CED7000 is one of the few shot timers on the market (there isn’t a lot of options out there). But it works quite well, and has a lot of options available, including the ability to add external buzzers and various time displays for competitions, etc.

If you’ve watched any of the Jerry Miculek videos on YouTube, from what I can tell, he uses the CED7000 timer. So unless you are doing some real crazy stuff, it should do everything and more than you could want.

I was turned on to this timer from a training class I attended with SWORD International. After getting a chance to use the timer in a real world training situation, as soon as I got home, I went online and ordered one from Midway USA!

The main thing I really like about using a shot timer is that it adds a sense of urgency, and heightened sense of awareness while training. It’s almost hard to describe, but when you hear that buzzer, it gets your heart pumping! Also, it gives a really good way to measure improvements and can help you balance that blend of speed and accuracy, down to the hundredth of a second.

For the actual use of the timer, it’s much nicer to have another person be able to start the timer for you, so it’s not in the way, and it’s a little more of a surprise. But, it comes with a wrist and neck lanyard, they also make belt clips for it, something that I may pick up soon. But for now, the neck lanyard seems to work ok for training on your own. There are multiple modes on the device, the mode that i mainly use is the standard IPSC “Comstock” mode with the buzzer set to “Random”. For training on your own, the random mode is the best. It basically boils down to when you hit start, it will randomly buzz anywhere between 2 and 5 seconds. This helps keep you from jumping the start and helps with that adrenaline burst you get.

There are also various other modes of operation, including Par times, silent mode, timer mode, … if you are interested in checking out all of the features, check out the owners manual.

An interesting point I found when going through the manual was that the timer will remember a string of up to 39 shots. So what that means is for any given set of shots (up to 6 sets) will contain 38 shots with splits, then any number over that will be the 39th shot. So if you fire 50 shots, 1-38 will be the first 38 shots, but the 39th shot on the timer will be your 50th shot. I’m not sure when you would want to time something that was more than 39 shots, but just so you know, if you need splits on all of the shots, you’ll need a different device. But I think for standard applications, this should work just fine.

To wrap it all up, if you are not using a shot timer during your training, you should be. The CED7000 is a great timer that has more functions than most will ever use and is the perfect addition to any training regimen. Go pick one up or find someone that has one and ask if you can try it out!

Here is a quick snap of me using the timer doing some shooting and reloading drills.

I recently had the opportunity to take part in a S.W.O.R.D. International, Introduction to Pistol class. I wasn’t sure what exactly to expect, I’ve taken CCW training classes and some various other trainings, but nothing at the level of this. Going into it with an open mind and just wanting to learn as much as i could from some experienced shooters, I must say, I was pleasantly surprised in every aspect. The trainers, Garett and Jeremy, were awesome! Hands down, awesome! There were no agendas or anything like that, and everyone in the class were just a bunch of people wanting to learn some new skills and have some fun in the process.

Here is how the day progressed….

We showed up to the SWORD office in the morning around 9am, then proceed to fill out some paperwork and get everyone in the class introduced to each other and to chat about everyones basic skill level and general knowledge. Since this was a Introduction to Pistol class, most of the people were novices. Though, there were a couple of us who had been shooting longer than others, but just had not taken a class offered by SWORD.

After a bit of chatting back at the office, going over some of the details, we headed out to the range. Here we did in-depth safety briefings, and basic “range rules” to keep everyone safe and to cover what to do in case of an emergency.

After the safety briefing, we jumped right in, going through all of the basics. How to properly make sure your firearm is unloaded, how to properly grip and present the firearm, how to properly take aim, how to properly squeeze the trigger… As an avid shooter for the better part of 15 years, a lot of the things that were covered were things i have heard many times, but the way they were presented and demonstrated shed a new light on the fundamentals. Showing that shooting is an ever evolving thing, and that you definitely can teach an old dog new tricks.

Once we had all of the basics down, and the trainers checked out everything we were doing to make sure we were doing right, we got setup for live fire. The chance to apply the things that we all had been practicing! After we all applied the fundamentals and shot a 5-shot group, I was amazed at how the little tips and critiques, in just a few minutes, improved my group sizes.

As Garett told us, it’s about training smarter and learning from each shot. Every shot you take, you should see what you did wrong, or right. You have to be aware of what you are doing and make every shot count!

After getting the basics down, and everyone in the class improving group sizes, in what i would consider record time, we layered on things like drawing from a holster and proper draw stroke, and then incorporating drawing and firing.

We did a fairly large amount of drawing and firing practice (layering on all of the fundamentals), after that, we moved into things like proper reloading practices and immediate action drills. Immediate action drills are drills you can use when you are shooting and your gun doesn’t fire, for example if the slide doesn’t lock back when out of ammunition, or there is a failure to eject, etc.

Over the entire training, I fired a little over 200 rounds, not a lot, but in those 200 rounds I think that I learned more than in the previous 5000 rounds before it.

In short, if you haven’t taken a class before, you need to. I don’t care if you’ve been shooting for 1 day or 20 years, you will learn something and have a great time in the process.

Here is what I brought to the class:

So you don’t need any crazy expensive gear or anything like that to take one of these classes. The basics, an open mind, and a willingness to learn are all you need!

Check out the S.W.O.R.D. International website, http://l.santsys.com/15q3LkA and get yourself, and your friends signed up for a training!